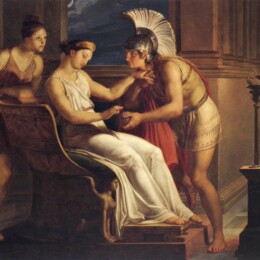 1. Ariadne was the princess of Crete, daughter of King Minos and Queen Pasiphaë. 2. Ariadne had a half-brother, called the Minotaur who was half-human, half-bull. 3. Oh yes, Ariadne’s mother, Queen Pasiphaë, actually mated with a bull, in an adulterous act of bestiality. However, she is not entirely to blame for her desire, because she was under a spell cast on her by the Gods as a punishment to King Minos for his avarice.

4. For the bull’s part, he was enticed into participating only because Queen Pasiphaë came disguised within a wooden replica of a cow. 5. Ariadne fell in love with Theseus when he came to Crete to slay the Minotaur. 6. The Minotaur was kept confined within a labyrinth.

7. Theseus was eager to prove that he was as great a hero as Achilles. 8. Ariadne helped Theseus navigate the labyrinth by sending with him a ball of thread and keeping hold of one end of it herself as she waited for him. He could then follow the thread to retrace his steps after vanquishing his foe and therefore find his way back out. Ariadne at the labyrinth, by Edward Cameron

9. Ariadne and Theseus ran away together in Theseus’s ship.

10. Theseus abandoned Ariadne on the island of Naxos. 11. There are actually multiple versions of the myth, which each give a different reason for why Theseus left her. In one version, his ship was blown out to sea during the night, beyond his control. In another, his betrayal was always part of the plan, because he was actually in love with Ariadne’s sister. In yet another, pregnant Ariadne was dropped off on the island to recover from sickness and Theseus fell under the spell of sea nymphs and forgot her.

12. When Theseus returned home to Athens, he forgot to change the color of his sails which would signal to his father, King Aegeas, that he was alive and okay. The king was so distressed by seeing his son’s ship arrive in the distance with sails announcing death, that he killed himself before the ship made dock.

13. Ariadne was rescued from the island by Bacchus.

14. Bacchus and Dionysus are two different names which both refer to the same figure in mythology. Bacchus is the Roman name and Dionysus the Greek. Young and noisy, he is the god of wine, theater, and revelry. 15. Ariadne was only mortal herself, but when she died, Bacchus threw her crown into the sky, where it became a constellation among the stars.

16. You can see this constellation yourself, if you know where to look. It’s called the corona borealis.